Long term friend and occasional client Kevin Osborne has managed an incredible achievement. MeWe360, which he launched in 2013, aims to help entrepreneurs from BAME backgrounds. Now based in two buildings in Soho Square, London, MeWe360 provides work space, mentoring and introductions to potential investors to those entrepreneurs.

There are 2 wings to MeWe360, a charity arm and a social enterprise. The project has recently received just over £1m in funding from the Arts Impact Fund, supported by NESTA and the Arts Council England as well as other funders.

Kevin wants to ensure that BAME entrepreneurs, particularly in music and media, get the best chances to success and scale. Kevin has a long track record of working on this having founded Tribal Tree in 1999 (which was a client of Red Ochre). 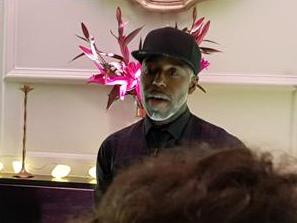 Kevin Osborne at the launch

Kevin launched the newly funded project with a reception a show of some of the people supported in October. We wish him and MeWe360 every success.