The Hammamet Conference, organised by the British Council, is the only leadership forum connecting leaders from the UK and North Africa. The conference provides a unique forum for dialogue and debate; with ideas and expertise drawn from six countries. This year was the 5th in the series and was based on the theme of creating Visions of a better future.

The conference takes place in Hammamet, Tunisia, and examined themes relating to political and economic reform through engagement, overcoming inequality, and how arts and culture can be used as a driver of change. Participants from participants from Tunisia, Algeria, Morocco, Libya, Egypt and the UK provided an eclectic mix of economists, academics, activists, musicians, Hip Hop dancers, poets, politicians, scientists and entrepreneurs. 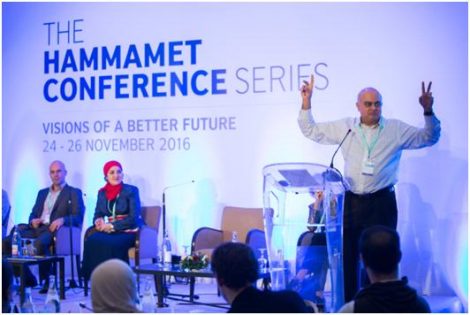 Uday gives a rousing speech to the Hammamet conference

Uday Thakkar gave a rousing exposition on the power of social enterprise to empower communities and create opportunities and networks that engender economic and social benefits and why it is so attractive to those considered to be at the margins of society and those that are discriminated against including women.